Join an intimate group of just 8 guests on this exclusive tour, led by company founder and expert Naturalist, Adam Meshallu. At $5200 per person, this will be an affordable opportunity to take a luxury safari in a highly personalized yet select small group setting. This itinerary has been strategically-designed to maximize game-viewing for this time of year, and the best part? Game-drives will be unlimited! 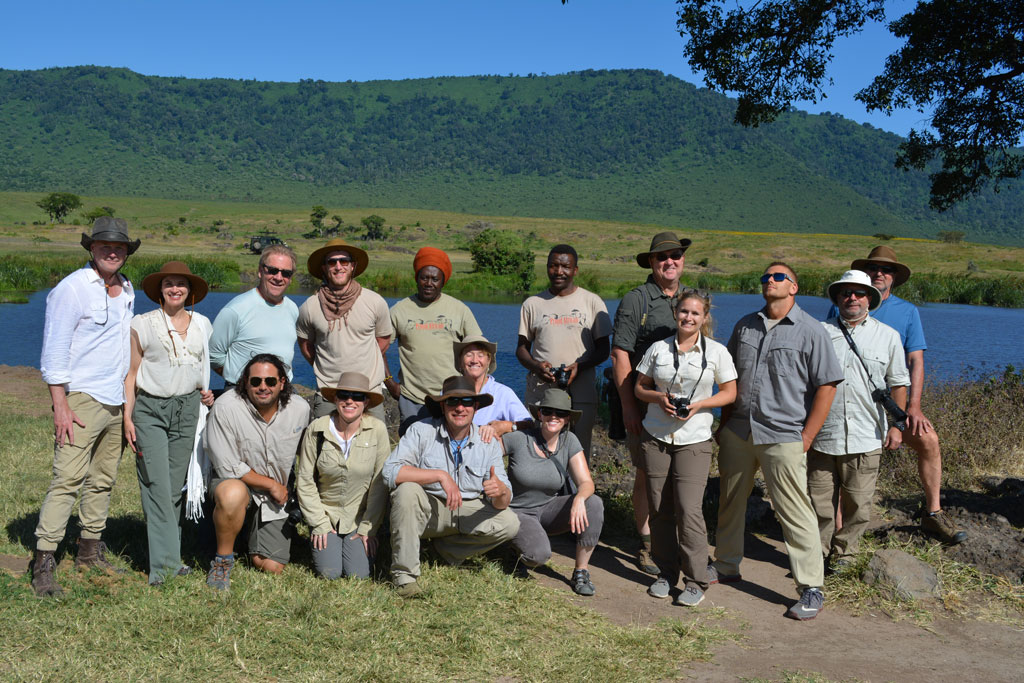 Welcome to Tanzania and enjoy the adventure!

Our custom-tailored luxury Tanzanis safaris are organized to the smallest detail while providing exceptional service and attention from start to finish. Our commitment to creating and delivering unsurpassed personalized adventures is the foundation for your seamless safari experience.

Enjoy a leisurely morning at the lodge and after breakfast plan for a tour of Arusha Town. Saturday’s are bustling with people at the traditional African Marketplace. It is fun to bargain for items or simply observe. Alternatively choose to visit a working coffee or banana plantation. Both coffee and bananas are among the main food crops in Tanzania and vital to the country’s foreign exchange earnings and cash crop exports. Did you know that beer can be made from mashed bananas and their peels? After lunch in town, you will be transferred to the Arusha Airport (ARK) to board a 15:00 flight (3:00pm) arriving 16:30 (4:30pm) to the Grumeti Airstrip in the Western Corridor of the Serengeti National Park! Upon arrival at the Grumeti Airstrip, your expert PAS Naturalist guide will greet you at the most primal wildlife viewing region in Africa. After a short orientation, you will game-drive en-route to your camp for the evening.

Game-drive in pursuit of predatory big cats and parts of The Great Migration, tracking thousands of wildebeest, zebra and gazelle in their endless pursuit for food and water. Also expect to see resident game such as Nile Crocodiles, Hippos, Buffalo, Giraffe, Baboons, and much more. The Great Migration of animals consists of 1.4 million Wildebeest, 250,000 zebras & 450,000 gazelles making their annual passage through various regions of Tanzania’s parks and conservation areas, searching for food and water. The vistas and landscapes in the Western Corridor are remarkable! Overnight at The Mbalageti Serengeti Tented Camp

Depart with breakfast on Day 4, travel via road transfer to the central region of the Serengeti National Park (1.5 hrs). The Seronera Valley is the best place for viewing lions, leopards and cheetahs year-round. Leopards can be spotted in the acacia woodlands, Cheetahs are found hunting on the open grassy plains, and lions prides are often seen lounging on rocky outcrops called “kopjes”. The Moru region is particularly well known for its’ beautiful landscape with rocky kopjes and is a must-see. Endangered Black Rhinos are often spotted in that region. We’ll also explore the central territory for parts of the migration, massive elephant bulls, jackals, spotted hyenas, giraffes, zebras and large schools of hippos and Nile crocodiles in the Seronera River.

Throughout your safari we do recommend at least one, if not more, early morning game-drives to catch the nocturnal animals returning from their hunts; this is when the animals are most active and there are fewer vehicles in the bush. Speak with your guide about the various ½-day-trips that can be taken in the central Serengeti – all of which have different things to offer in terms of landscape and animal activity; Seronera, Moru, Gol, Barafu, Namiri plains, etc.) Overnight at The Kubu Kubu Tented Camp.

After breakfast at the camp, proceed via road transfer and game-drive en-route (3 hrs) to the Ngorongoro Crater; a unique ecosystem also known as “the eighth wonder of the world”. During our transfer we will stop in the morning at the historic Ol Duvai Gorge (labelled the “Cradle of Mankind”) which is where the first early human species occupied 1.8 million years ago. Your guide will arrange for a private tour down into the excavation site where the famous researchers Louis & Mary Leakey first made their incredible discoveries about the origin and evolution of man. The stop will take approximately 1 hour and we will enjoy a picnic lunch while enjoying a beautiful view of the gorge before continuing on our way to the crater, where we will spend the afternoon game-driving.

Pending interest, we can visit an authentic Maasai tribal village once we enter into the Ngorongoro Conservation Area. This stop would also take approximately 1 hour.

Upon arrival at the gates of the crater, you will look down upon the world’s largest inactive, intact, and unfilled volcanic caldera (2000ft deep and 100sq miles). The crater formed after a large volcano collapsed on itself 2-3 million years ago, Take-in the “unparalleled beauty of one of the world’s most unchanged wildlife sanctuaries” while in search of resident game such as elephant herds, lion prides, cheetahs, hyenas, zebra herds, Topis, gazelle, and other ungulates. Overnight at the top rim of the crater and enjoy the magnificent views from The Ngorongoro Serena Safari Lodge.

Today you will enjoy a full-day game-drive in the crater, at your discretion. Enjoy a picnic lunch in the bush. Once you are through game-driving in the crater, you will descend through a lush, green Montane forest before reaching your final destination for the evening. Overnight at The Plantation Lodge.

Today we will embark on a wildly unique cultural adventure, we will depart with breakfast via road transfer (approximately 1.5 hours) to the Lake Eyasi region where we will spend a day with the Hadzabe Bushmen, one of Africa’s original hunter and gathering tribes. These nomadic people live in the African bush, and move their “home” pending where the food source is most prominent throughout the year. They speak an ancient click-language so we will pick-up an interpreter guide who will also track ahead of us to find their location and prepare the family for our arrival. Witness or join them in ritualistic ceremonies and then take-off on a hunt! (They will catch, and eat, anything from a small squirrel, to a monkey, to an antelope). You will learn first-hand about their survival techniques and get hands-on experience with their various hunting weapons (such as hand-made bows and poison arrows) and likely participate in gathering wild fruits and honey.

Following the Hadzabe, you may have the option to visit 1-2 more tribes (Datoga and Blacksmith), with those encounters being 20-30 minutes each in length. Once you are done with the tribal encounters, you will be transferred back to the Plantation Lodge, arriving early-mid afternoon, so you may relax around the beautiful lodge for your final day in the bush.

After an early breakfast at the lodge, we will depart mid-morning via road transfer and enjoy a short, morning game-drive in Lake Manyara National Park. This is one of Tanzania’s smallest National Parks which can be enjoyed within the span of 2 hours. Expect to see beautiful waterbirds, monkeys, elephants, hippos and other safari animals. This is a great park for birders! Enjoy a picnic lunch in the park before heading back to Arusha (1.5 hrs). Upon return to Arusha we will stop at the impressive Cultural Heritage Center for souvenir shopping. A day-room at The Lake Duluti Serena Lodge will be arranged so you may refresh and repack. Early dinner and transfer to JRO for international departure will be provided.

• All accommodations
• All meals (breakfast, lunch, dinner)
• All airport transfers / hotel transfers (all safaris are 100% escorted)
• VIP Meet-n-Greet Airport Service (assisted customs process)
• All national park and reserve entrance fees, including special game drive permits with exclusive access
• Use of a 4WD private safari vehicle, including unlimited mileage/fuel for game-drives
• Private services of your expert Naturalist driver-guide
• Internal regional airfare (scheduled bush flights)
• Use of Nikon Action 7 x 35 binoculars while on safari
• Use of charging stations in your vehicles for cell phones and camera batteries
• Unlimited bottled drinking water, soft drinks and bush snacks in your vehicle
• Comprehensive support from our Tanzanian office for the duration of your safari
• 24-hour access to the Flying Doctor’s Emergency Response Center for medical advice and air ambulance requests should an emergency evacuation be required

• International Airfare to and from Mt. Kilimanjaro International Airport (JRO)
• Tanzanian travel visas can be obtained through https://www.travelvisapro.com//visa/tanzania
• Gratuities to your driver-guides. Recommended $45-$65 per guide per day, to be consolidated by the group and paid in ONE-LUMP-SUM at the end of your safari
• Travel Insurance
• Liquor/Wine/Beer
• Laundry services

Assumes 2 safari trucks with 4 guests per truck, each vehicle with one expert Naturalist driver-guide